Lita’s predecessor was a 12-year-old black and white border collie that Joyce Fay from Bro and Tracy Animal Welfare had helped me adopt in late August of 2000, Nikki was a great dog – loved frisbees and had the border collie herding instinct– but by early 2011 she was beginning to make us aware that her days were numbered. I reached out to Joyce again and asked if, in advance of Nikki’s passing, she would help us find a successor (Nikki was irreplaceable).

Several weeks later she called to say that she had just returned from Gallup with a black and white male border collie and a reddish-brown female border collie cross. Could we come over and take a look at both these dogs? We were there in a heartbeat.

The black-and-white was a somewhat reserved but very handsome younger guy that Joyce made us aware was likely destined for placement with a woman in the Durango area who had not only a ranch but some livestock. Were we interested in the reddish-brown female? We sat down on the couch and waited.

In less than a minute the door opened and an absolutely scruffy, malnourished red and white border collie cross leapt on the couch between Kay and me, made immediate eye contact, and sent us strong invisible signals of “pick me, pick me.” I thought she might’ve been from Jamaica because of the rastafarian dreadlocks she was covered with.

Her disposition was ideal. She was friendly and very eager to find a forever home. Joyce told me that she would see if she could get the dreadlocks combed out and that if I wanted this girl who at the time was unnamed, she could bring her to my home tomorrow. We agreed and returned home to wait.

When Joyce arrived the following day the red and white border collie was now a completely different dog. She had been buzz cut by a Rio Rancho groomer and her extremely short hair revealed how pitifully thin she really was. She weighed about 30 pounds and now weighs close to 45 just to give you some idea of how emaciated she was. She adapted quickly to Nikki and Nikki grudgingly but without overt aggression allowed her into the family.

One of the first items of business was getting together her name. I love to play with words and have frequently converted a well-known phrase into a very different phrase by simply changing a syllable. In this case since she was a border collie, I decided she could become a border “chollie.” I explained to her that, “Chollies are a good thing and since she was one but still pretty small she was going to be called a Cholita, or simply, Lita for short.” Lita took all this in without being too quizzical and quickly became a sweet member of the family.

From what Joyce could tell us Lita had been a very young street dog in Gallup and had been given a leash on life by being brought home to a rural Gallup neighborhood but not very effectively rescued. She was fed to some extent and watered to some degree but pretty much left free to roam the neighborhood. She quickly discovered the delight of chasing a FedEx or UPS truck down the neighborhood street. A school buses for her was a particular nemesis. The neighbor who observed all this would watch Lita come to her window each morning and stare forlornly at her dogs asking, “Can’t you come out to play; won’t you take me on a walk with you; can’t somebody love me?” The neighbor in Lita’s best interest before she was either crushed by a school bus or eaten by a coyote called animal control and she was in their care.

She had been in a busy young border chollie since when the vet did the hysterectomy as part of the sterilization process that made her ready for adoption, she was discovered to be pregnant with her first litter. That may have attributed to some behaviors we noticed within the first year when we brought home a eight week old Cavalier King Charles Spaniel puppy we dubbed “Reina”—“The Queen” in Spanish. Lita quickly became her mama carrying her around by the scruff of the neck and digging a lovely den in the backyard for Reina.

Lita took to training like all border collies take to their work–she excelled. She went through a cycle of obedience training and at the end of the second year with us we determined it was time with all of the fine obedience skills she had acquired to take her through training to become a therapy dog.

There are several certified pet therapy groups functioning in Albuquerque, and we had a positive prior experience with Southwest Canine Corps of Volunteers (SCCV). Nikki had been a SCCV therapy dog as well and we were delighted that Lita aced her induction process and passed the requisite five site visits under supervision with flying colors. Reina was certified at about the same time and so began a wonderful series of weekly visits to the Presbyterian Kaseman Hospital every Thursday afternoon for several hours.

Both dogs were so tightly bonded that we discovered our visiting work best if Kay took Reina to one section while I took Lita to a different section. The technique Lita and I developed to bring the gift of a loving dog to a hospital patient was to kneel with my right knee touching the floor beside the patient’s bed and pat my left thigh as the command for Lita to put both front paws on my upper-left thigh which placed her head at patting level with the patient’s hand.

Both dogs were loved by staff, patients, and families. Comments after comments were shared raving about what a wonderful gift of unconditional love these two dogs brought to the healing process. On frequent occasions the patient would tear-up with an explanation of how badly they missed their own dog at home or how empty their life was now that wonderful animal companion had passed.

Children were particularly delighted! Both dogs had been trained to roll over on their back to permit tummy rubs for younger children. The kids would want to know how we had trained them, and we would explain. The youngsters would then want to ask the dogs to do tricks which we showed them how to accomplish. On some occasions patients would ask if Lita could actually get up on the bed so they could be even closer to the therapy dog and Lita would oblige with an artful leap that always placed her in just the right position to snuggle with the recovering patient.

Several staff members developed extra special bonds with Lita. One charge nurse we knew quite well because we had worked with her with our previous set of therapy dogs discovered that Lita and Reina both were crazy about peanut butter. Peanut butter is one thing that the hospital had in abundance, small individually sealed and wrapped containers that the nurse would open. With a plastic spoon dipped with a heavy load of peanut butter that nurse would make both Lita and Reina into the happiest animals in Albuquerque

Over the years at Kaseman hundreds of hours of pet therapy time were logged and literally thousands of smiles were generated. We could always tell when the two therapy providers were beginning to tire – the Cavalier was particularly good about signaling that she was done for the day. We would trek back to the volunteer office, spend a few minutes chatting with the current coordinator (who clearly loved both the therapy dogs) and head for the car. When Kaseman repurpose their operation and closed the patient facilities in 2017, we shifted our pet therapy services and Lita and Reina began bringing smiles in Rio Rancho at the Rust Medical Center, also part of the Presbyterian system.

The pattern was the same with a few minor differences. Lita knew exactly where we were going on Thursday afternoon because she would be brushed in advance of the visit and then asked if she wanted to go “be ‘putic”, my purposeful mangling of “therapeutic.” She would float up into the back of the car and watch with border collie intensity as we headed across Albuquerque. Once we turned west off Rio Rancho Boulevard heading for Rust Memorial Hospital, she would begin a low pitched whine in anticipation of the work that she had grown to love. It was very evident that she got as much out of being a therapy dog as she gave to those who received the therapy.

This chollie had an unquenchable thirst for affection; perhaps her neglected formative year as she moved from puppy-hood into the Gallup animal control cages had left her with a great big hole to be filled with love. Every week bushels of that love were shoveled into that void by patients, families, and staff as we made our rounds at our new location. There are just too many stories to tell about the choked up moments such as when a World War II vet broke into tears in his hospital bed as Lita licked his hand and I offered a snappy military salute telling him how much we were honored to be serving the greatest generation.

Or, how I, a Vietnam veteran, was embraced by a North Vietnamese Air Force officer about my age who had lost a leg and was recovering from an infection after he patted Lita’s head. We both agreed–that war was a long time behind us. Lita helped bridge that gap.

She’s getting older now, aren’t we all? Covid-19 is put our therapy visits on hold, but Lita still motivates me to walk every morning and enjoys our snuggle ritual in the evening as she is prepared to enter her kennel. Our best guess is she’s about 10 years old and is gradually and gracefully slowing into her next stage of life. We simply enjoy the present moment together knowing that chollies and the human companions of chollies form an unbreakable bond. 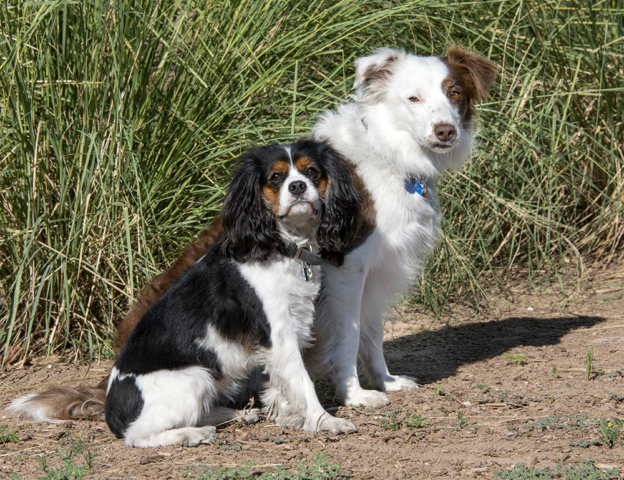 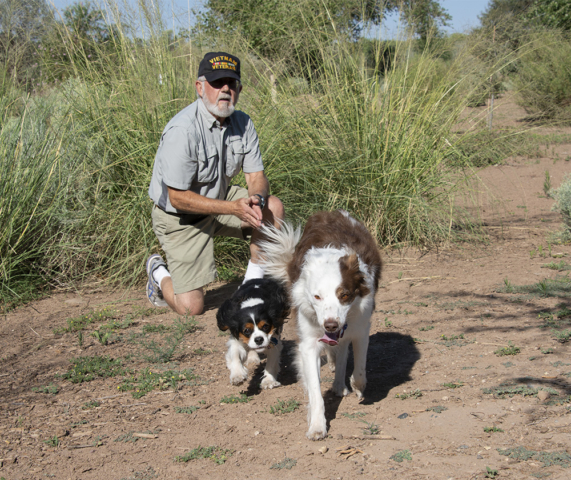 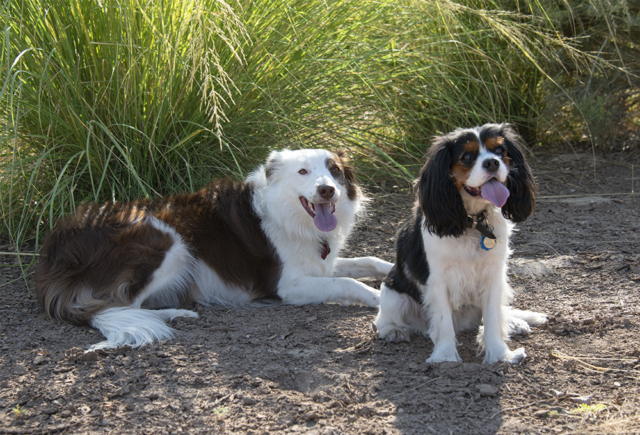 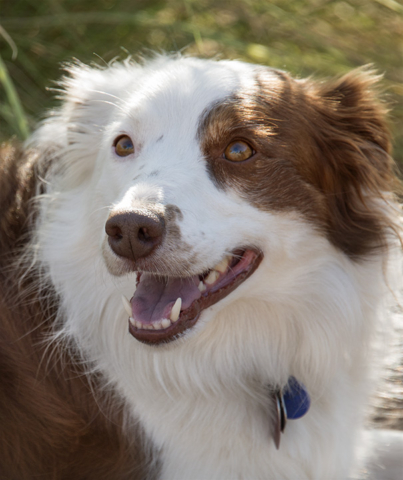 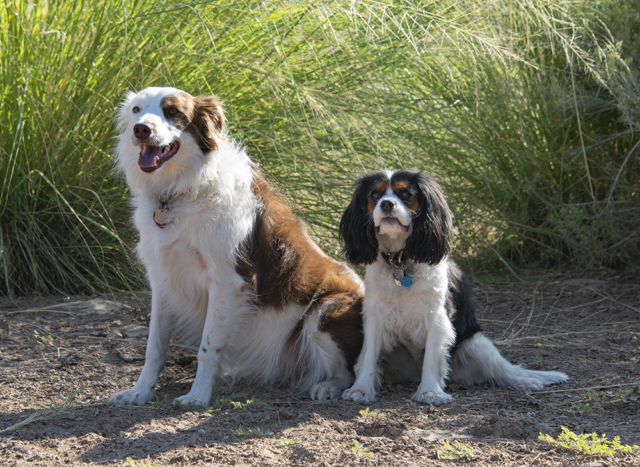 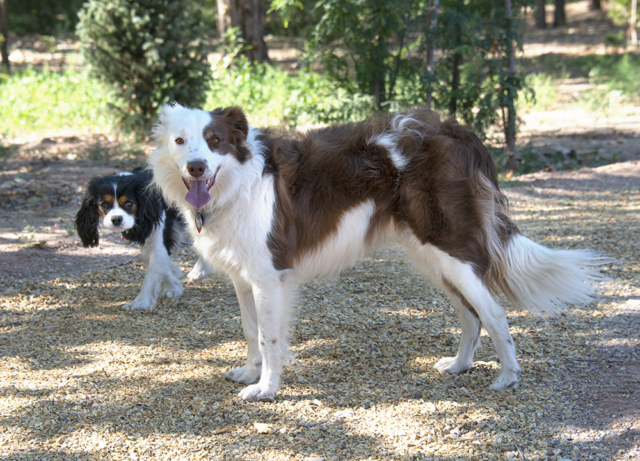 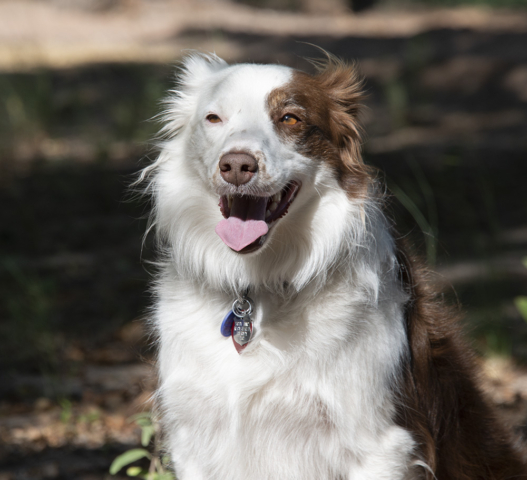 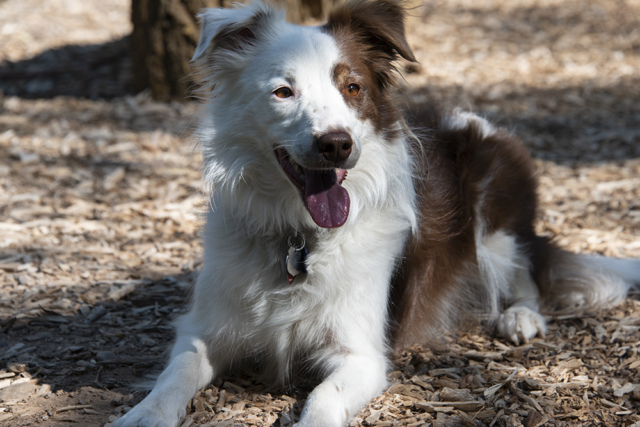 Lita with her pal Reina

Click on any image to see it larger and scroll through the photos.